…CHOSEN TO SUFFER THE STIGMATA

Jarred was born and raised in Montreal, Canada and was chosen from birth as a messenger from Heaven and a vessel for its light.  He is an ordinary and insightful man who is the proud father of five children, each with their own unique heavenly gift.

He is a natural born clairvoyant, medium, shaman, exorcist, haunted house specialist and energy worker.  He uses his unique gifts to help guide others in their path and spiritual quest by connecting with and receiving messages and visions from Angels in the spirit realm.

He also provides his clients with the rare opportunity to connect with loved ones who have passed in order to bring them peace, closure and a deeper understanding of the answers to their questions.  Jarred offers you the comfort of closing the gap of wonder and uncertainty with the ease of reassurance.

He serves clients of all ethnicities, backgrounds, religious faiths and sexual orientation. He works closely with the Archangels and Jesus on a daily basis and he suffers the pain and occasional marks of the Stigmata (below photos are Jarred’s foot after the nails of the crucifixion go in during Stigmata).   He is a kind and gentle soul and is known for charity work and helping those in need. 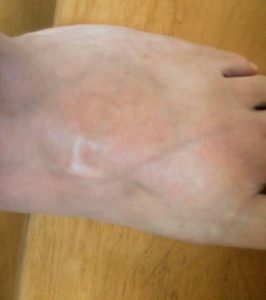 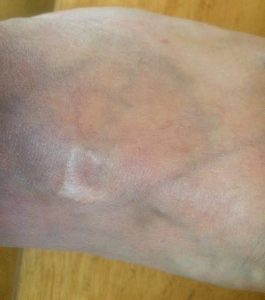 Working closely with nature and animals, he has a deep affinity for the native way of life. His gift allows him to be a medium who contacts the deceased, a clairvoyant who receives messages from heaven, a shaman (a medicine man) who helps those who are in pain as well as those with sickness and disease.  He is one of the few exorcists in the world and has been hired by those around the globe to battle demons and help save those who have been possessed to give them their bodies and lives back.

As a haunted house specialist, he clears homes of entities which harass and hurt people and he does so without the use of machines or fancy equipment. Not only does he find entities, but is one of the very few worldwide who gets rid of them!  He was chosen to bring light to the world and to fight the shadow. 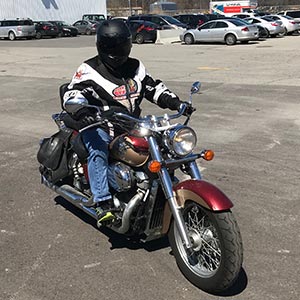 His expertise is offered in both English and French although he is fluent in several languages.  He serves not only a local and national clientele, but a growing global client base who have sought his unique abilities from afar – New York, Los Angeles, Vancouver, Miami, Mexico, Venezuela, England, France, India, Morocco, Israel, Italy and Greece to name a few.

Hundreds of his clients have credited him with saving their lives whether by information he provided during clairvoyant sessions, by his shamanic treatments for disease and sickness when traditional medicine failed them, by removing dangerous entities from homes and by performing real exorcisms to remove demons who possessed bodies.

Jarred is blessed with a very powerful mission and gift. He has been Chosen as a vessel and messenger to deliver messages from heaven and to spread truth.

Heaven uses Jarred’s physical body as a conduit for light that he uses to combat demons and the shadow.  He is a warrior and dedicated to serving you and improving your well-being.

WHAT MESSAGE AWAITS YOU!

Are you looking for guidance?
Not sure what to do next?
Feel stuck and need clarity?
Do you have questions about your life and yet the solutions feel elusive?
Are there unexplainable experiences that you know need a different approach in order to solve or put to rest?

If you are looking for a fortune teller, a card reader or spiritual junkie – I’m none of those. I am a messenger and vessel for all of the above specialities and have many valuable and life-changing messages for you. I will tell you what you need to hear as opposed to what you want to hear. I have saved many lives with the insights I deliver. I provide deep and profound sessions. I have amazed even the unwavering sceptics. Topics covered include finances, health, relationships, love, work and much more. I invite you to contact me for more information or to book an appointment.

Offering you the gift of light and clarity,

“I met with Jarred last week and received a message that gave me peace. Thank you for sharing your gift with me.”

“Yes, I understand your feeling of enlightenment after seeing Jarred . The aura around him anyone spiritual can feel is light; healing. His strong energy is infused by this light. You can actually feel the heat; healing penetrating into you as he massages. It’s something everyone should experience. It’s also a chance for a person to connect; open themselves to good; a widened Universe. Definitely a higher awareness.”

“I really enjoyed my experience with Jarred! He did a reading for my mom and I and told us things that no one would have known! I recommend his services to everyone.”

“I feel the difference Jarred. Your chakra treatment was wonderful. I felt my heart beating in all four stones on my back and today I feel like new. Thank you. Your psychic reading also gave me a lot to think about.”

Get the latest updates regarding Jarred’s Podcast, his interviews , his current book, the next book he will soon be working on, the movie he had a speaking role in and other exciting news and developments! Enter your info below and receive updates!

You have Successfully Subscribed!